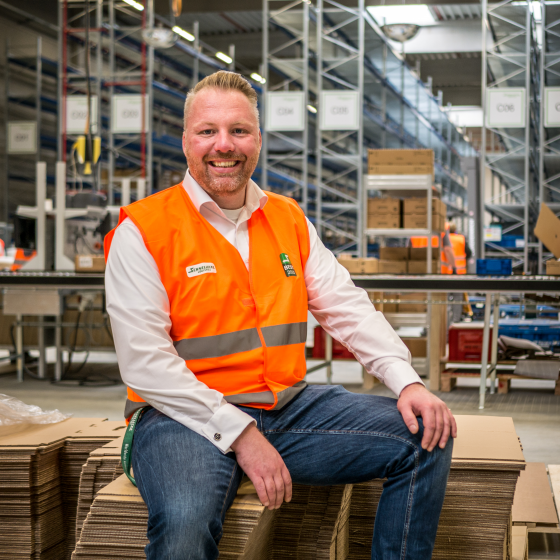 "My first contact with Schnellecke was at the “Unternehmen stellen sich vor” job fair in Bremen. That was in 2006 while I was studying Business Administration with a focus on Logistics. When I had to write my thesis, I wrote to Schnellecke because I remembered them very well. So I came to Schnellecke in Portugal together with three other diploma students, and we wrote a thesis about process analysis in the assembly of center consoles. We were there for four weeks. Schnellecke took care of the flight, accommodation and all-round care. We were very warmly welcomed there.

The thesis was quite good, and so I was offered admission to the Schnellecke trainee program immediately after completing my studies. Of course, I didn't have to think about it for long. I thought I'd go back to Portugal and was practically already wearing my swimming trunks, but then I was sent to Glauchau in Saxony. I spent four months there working on the topic of route optimization for tugger trains, among other things. After that I spent three months in Eisenach, where Schnellecke worked for Opel. Then I was supposed to go to Pamplona and had my swimming trunks packed again, but at the last minute the plans changed and I came to Hamburg. There I quit the trainee program prematurely and became "Head of Operations Control and Systems"".

"In 2010, I moved to a Bremen-based logistics company because I simply wanted to try something different. I also worked in different areas, travelled a lot and got stuck in the USA at some point. So I worked at the Tuscaloosa site for four years.

I learned a lot from this, in Malaysia for example how to manage a business full of Christians and Muslims, or in the USA with its hire and fire mentality. This has also benefited me personally, also for the work I am doing here now. Not only with regard to the different cultural backgrounds of our employees, but also the different corporate cultures that I got to know through working with companies such as Daimler, BMW or VW.

During this time, I never lost contact with Schnellecke, talked frequently on the phone, and also met with former colleagues and superiors. In 2015, I returned to Germany, where I was responsible for all project start-ups."

And why did you return to Schnellecke?

"Schnellecke invited me to Wolfsburg, where I met the same people I had worked with six years before. That impressed me and immediately I somehow felt at home again. And it showed me that people stay here for the long term. So I went back to Schnellecke. Not because of the money, but because of the development prospects of the company that I was shown, and because of the atmosphere that prevails there.

Coincidentally, Schnellecke was just taking over the business in Tuscaloosa from the competitor in Bremen, and so I was back in the USA in no time, where I hired the same people I had hired four years ago, this time for Schnellecke.

After the setting-up of the site there was completed, I returned to Germany, where I immediately became involved in setting up the Soltau site."

"At Schnellecke it is possible to have fun at work over the long term. It is not like that everywhere, as I have experienced. There’s no board full of egomaniacs and no superiors that tell you what to do at every step. You find a lot of scope for creativity here – you just have to use it. If you have ideas that deviate from the standard, you are told to "just do it" and if it works, this becomes the new standard.

I really enjoy working at Schnellecke. I like going to work every morning. And that's my goal for every single employee here whether on the shop floor or in the office. I would like for them to come to work in the morning with smiles on their faces.

I keep hearing that we treat our employees differently from other companies in the region. It is Schnellecke's philosophy not only to see employees as numbers, but to really be interested in them as people. And that's why I always take an employee from the shop floor with me on the morning tours with our management, so that they develop an understanding of the entire process and not just see their own workplace."