"Schnellecke was the best thing that could have happened to me" 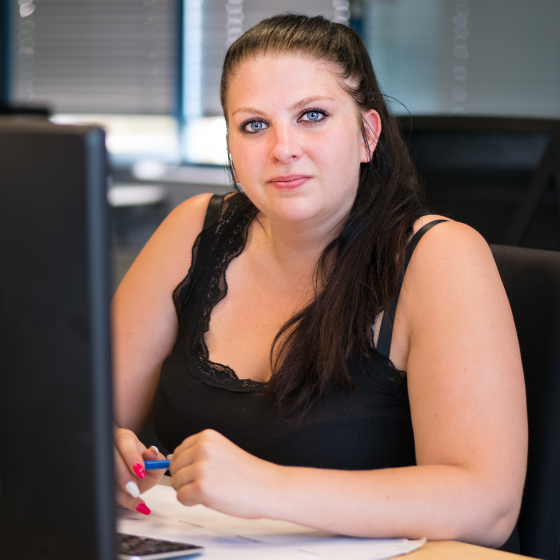 “I did a business management assistant for office communication apprenticeship at Schnellecke, which I started in 2008. Half of my apprenticeship I spent in Wolfsburg, the other half in Braunschweig.

Due to a death in my family, I had to suspend my apprenticeship for a year, but that was not a problem for the Schnellecke training manager. The way I was supported was really great.”

And what did you do after your apprenticeship?

“After completing my apprenticeship in 2012, I was offered a contract here in Braunschweig and at first I worked in Truck Clearance. Work is carried out around the clock in Truck Clearance, since the documents that are received in Processing are processed there. Goods are recorded based on the waybills that are on the trucks. From these, an unloading list is generated and only then can the trucks be unloaded.

At the beginning of 2016 I then switched to Processing. Although I enjoyed the work in Truck Clearance, I wanted to have more contact with other people. I feel very comfortable where I am now, and I enjoy the work.”

“When a truck arrives at our premises, the driver first has to come and notify us. We accept the papers that they are carrying and which also stipulate their orders, and we direct them to a bay for loading or unloading, or give the driver a pager if it is going to take a bit longer. There are a total of six people in my department at all times, since of course trucks also arrive at night.

As well as processing, we also manage the trailers, meaning we do the scheduling for them. We assign the trailers and have to know where they are located. That is not always so easy when, for example, a driver writes down the wrong number.

Damages are also reported to us, and claims for incorrect deliveries go through us. We also have to quickly decide how we are going to handle these, especially during the night shift, since there is nobody there besides us. So it is never boring. There is always something to do, but I really enjoy the work.

I came to Schnellecke more by chance than by design, but it was the best thing that could have happened to me.”