"Always be one step ahead, that’s my motto"

Rolf Schnellecke inducted into the Logistics Hall of Fame.

Following Amazon founder Jeff Bezos in 2017, Professor Rolf Schnellecke was inducted as a new member of the Logistics Hall of Fame in 2018. The current Chairman of the Supervisory Board of the Schnellecke Group was elected to the international Logistics Hall of Fame as an “outsourcing pacesetter and innovator in automotive logistics” from among 25 candidates representing eight nations. He is the 34th member among the world’s most influential logistics professionals. 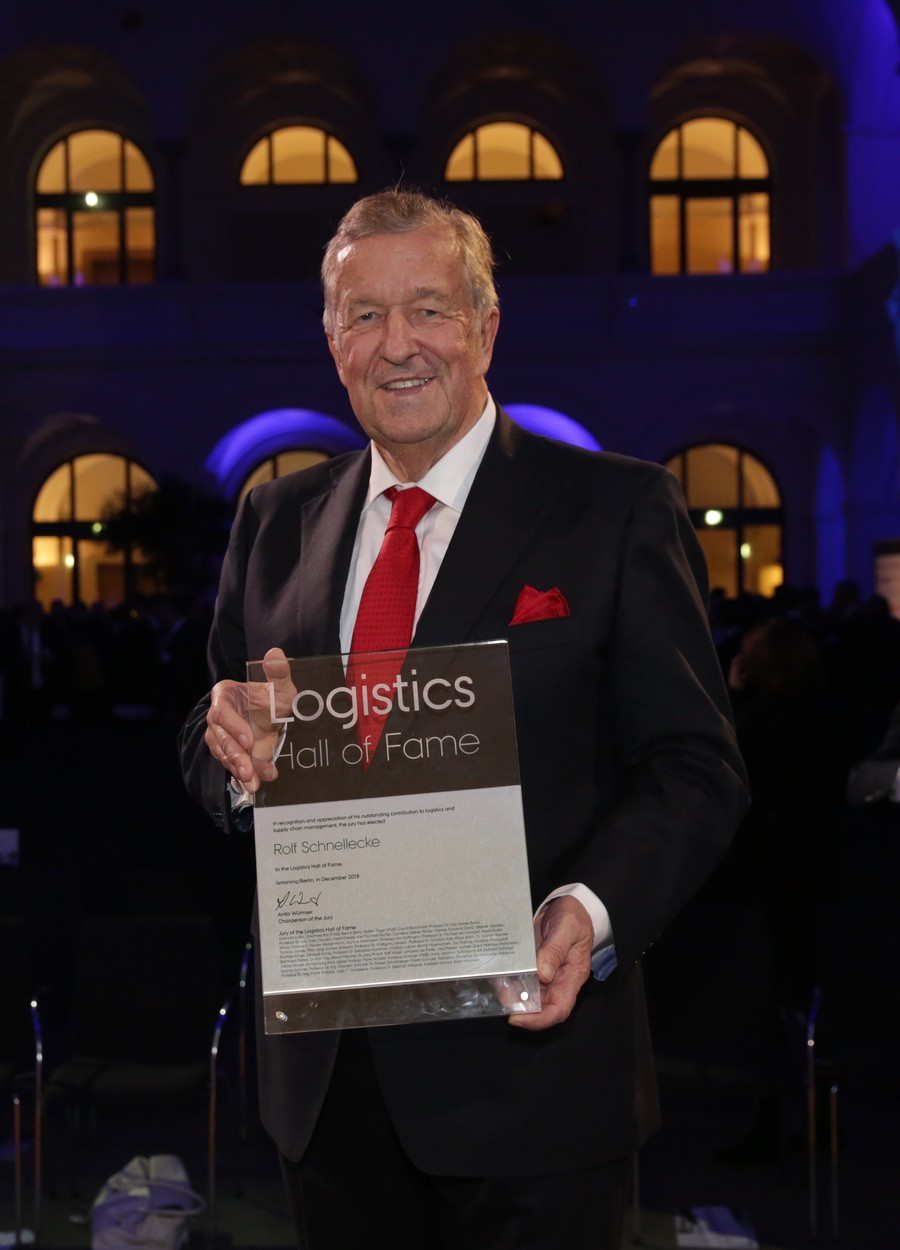 250 guests came to Berlin on December 5 when Rolf Schnellecke was officially inducted into the Logistics Hall of Fame at a gala reception at the Federal Ministry of Transport and Digital Infrastructure. Also present were Schnellecke’s family and many executives.

There was great applause and a standing ovation when Rolf Schnellecke accepted the glass and metal membership certificate. “With vision and determination, Professor Rolf Schnellecke has raised automotive logistics in particular to a new level. For this, he deserves our thanks and respect,” said Federal Minister of Transport Andreas Scheuer in his laudatory speech. And added with a smile, “What are Google or Amazon if you have Schnellecke?”

In his laudation, Professor Dr. Thomas Wimmer, Chairman of the Board of the German Logistics Association, said, “Rolf Schnellecke is a pacesetter. When he speaks up, everyone knows that now things are going to get interesting and relevant.”


The opportunities of outsourcing recognized at an early stage

Rolf Schnellecke recognized the automotive industry’s drive toward globalization and the reduction of vertical integration early on. He saw the future of logistics in the associated need for outsourcing and systematically transformed his parents’ company from a regional rail and furniture forwarding company into a global player and outsourcing partner. In 1990, Schnellecke became the first logistics service provider to take over the then highly innovative assembly of door and side panels, thus breaking new ground in the forwarding industry. The project became a blueprint for modern value-added logistics and, copied many times, is still the standard in automotive logistics today.

“The fact that a simple freight forwarder, and we were nothing else at the time, would take on logistics supply tasks of this depth and thus responsibility for the automobile manufacturer’s production had been completely unheard of,” reminisced Rolf Schnellecke.

In fact, there were many doubts as to whether a simple freight forwarder could be entrusted with such demanding responsibilities. Some at VW could already see the assembly lines at a standstill. “VW was watching us with a wary eye,” said Rolf Schnellecke. “Many thought we wouldn’t be able to do it. It was one of my greatest moments when we were later praised from the highest places in the company who said, “You’re doing it even better than us, with a lower error rate and significantly more economically.”

All that is now history. Today, in addition to transport logistics with inter-plant transports, regional forwarding, milk runs, and JIT and JIS transports, Schnellecke is active for numerous companies in packaging and supply logistics, sequencing of parts and assemblies, and module assemblies. Supply logistics for automotive plants with vendor parts and modules range from warehouse management and material flow management, through picking and sequencing, to material supply of production lines.

Innovation as a guiding principle

lf Schnellecke has always focused on staying ahead through innovation. In the 1970s, he was one of the first freight forwarders to have large-capacity vehicles developed for the ever-lighter components of the automotive industry. In the 1980s, he made use of the emerging computer technology, and today he is driving digitalization and automation forward.

Schnellecke is convinced that “the most underestimated success factor is being ahead of the game technologically. You have to face the challenges of the time, not only for tomorrow, but also for the day after tomorrow. Always be one step ahead, that’s my motto. And be it unconditionally, even if it hurts.”

For all his successes, the new member of the Logistics Hall of Fame has remained humble. This is also expressed in his reaction to this big day: “The appreciation is excessive, but it feels good. I accept the award on behalf of the entire Schnellecke Team.”.

“With value-added logistics, Rolf Schnellecke broke completely new ground in the freight forwarding industry and, with great foresight, developed a successful business model that has shaped an entire industry. It would be unimaginable for the automotive industry today to do without these logistics services,” said Anita Würmser, managing jury chair of the Logistics Hall of Fame, explaining the decision of the international expert jury.

She added that Rolf Schnellecke can claim to have significantly influenced and developed automotive logistics beyond the boundaries of his company. “His early approaches to adding value to pure transport and warehousing processes and to offering services and production activities as an outsourcing partner are visionary and had a groundbreaking influence on automotive logistics,” the jury statement read.