Working for Schnellecke: A lot of freedom, a lot of responsibility 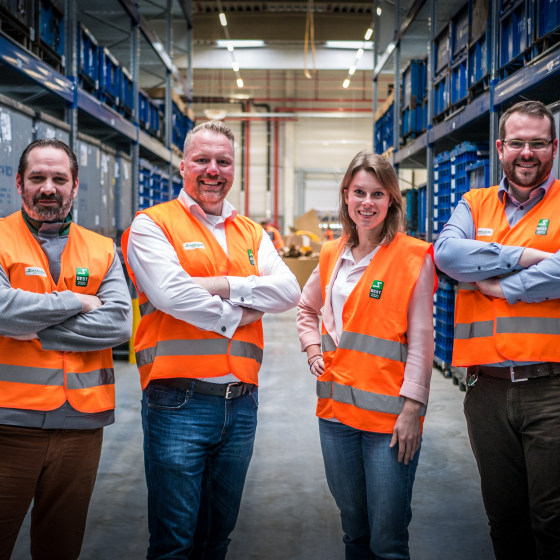 The Schnellecke Group offers numerous apprenticeships and jobs with future prospects at many locations in Germany and around the world for high school and college students, graduates, and people with professional experience.

We look for and employ people with personality. Your professional qualifications do also play a role of course, but what matters most is that you are the right person for us and our corporate philosophy. As a family-owned company, we have clear values and we live them. We give our employees encouragement and the space to realize their ideas. You can take on responsibility quickly. At Schnellecke you will find flat hierarchies, short decision-making paths, and, as many employees attest, a pleasant working environment.

The Schnellecke Group is one of the leading logistics service providers for the automotive industry with an annual turnover of around one billion euros. More than 19,400 employees at over 70 sites on four continents – those are the figures. But much more important is what lies behind them.

With us you make a career in a family business

For a logistics company, people are the most important productive factor. That is why we pay attention to whether a candidate is right for our company and really identifies with our values.

As a family-owned company, our values and mission statement are not an accessory but put into practice and filled with life every day. This allows our employees to plan their careers in a completely different way. We allow a lot of room for responsibility, and there are fewer guardrails. However, for this we need independent, forward-looking employees who are happy to meet such demands and take advantage of their opportunities.

By the way: Schnellecke has been honored as one of the best 25 employers in the automotive sector. We have received the TOP Employer seal of approval, which is awarded as part of a study by the CRF Institute, several times. The results of the study show that Schnellecke is one of the companies in the automotive industry that performed very well in the categories of communication channels, benefits, team-building activities, and personnel development programs.

On the following pages, we would like to give you a first impression of what we can offer you and where and how you can join our company. Instead of a lot of words, we will let Schnellecke employees tell you themselves about their work and our company. Who knows? Maybe you will soon be one of them.

Working for Schnellecke: More than just a job

A company is more than just the sum total of facts that can be listed on a website. It is like a constantly changing gigantic living organism with its very own work atmosphere that can be different from department to department. And it is the place where its employees spend almost as much as a third of their time.

How is one then able to get an impression beforehand of what it means to work for Schnellecke? We have asked a few members of our staff to describe what they do at Schnellecke and what they consider especially good about Schnellecke as an employer. On the following pages you can read, listen to, and see why for many of our employees their work is more than just a job.

Florian Witteborn explains why he enjoys his work in Scheduling at the Transportlogistik in Braunschweig so much.
Learn more

Carla-Bernadette Osteroth started as an intern at Schnellecke and is now an administrative director.
Learn more

THE LIFE OF A DRIVER IS STILL WORTH
LIVING HERE

Torsten Behrens has worked at Schnellecke as a truck driver since 2001 and appreciates the reliability of Schnellecke.
Learn more

Christian Löschen made his first contacts with Schnellecke at a job fair during his studies. Today he is executive director of Schnellecke Modul GmbH.
Learn more

SCHNELLECKE OFFERED ME A PROFESSIONAL OPPORTUNITY THAT I GLADLY ACCEPTED

THINK OUTSIDE THE BOX EVERY NOW AND THEN

Birgit Hinze has worked for Schnellecke since 1982, first as an apprentice, today as the Team Leader for Job Training in the German Region.
Learn more

MANY THINGS ARE DIFFERENT AT SCHNELLECKE

Michael Kummerow started as a shift supervisor and today he is a quality manager.
Learn more

THE BEST THING THAT COULD HAVE HAPPENED TO ME

Joanne-Anissa Palmer did her apprenticeship at Schnellecke and now works in Truck Management.
Learn more

I  APPRECIATE HOW MUCH TRUST HAS BEEN PLACED IN ME

NOW I AM A TRAINER MYSELF

Marcel Kuczyk started as a warehousing specialist and is now a deputy training supervisor for warehouse logisticians in Saxony.
Learn more

SOCIAL RESPONSIBILITY AS A PRINCIPLE

Good working conditions and fair wages are not only a matter of course in Germany but also in all countries in which we operate.
Learn more

At Schnellecke we like to recruit our junior managers from our own ranks. Use this opportunity for your professional advancement.
Learn more

At Schnellecke, you have the opportunity for assignments in other countries or even, if you wish, for a permanent job there.
Learn more