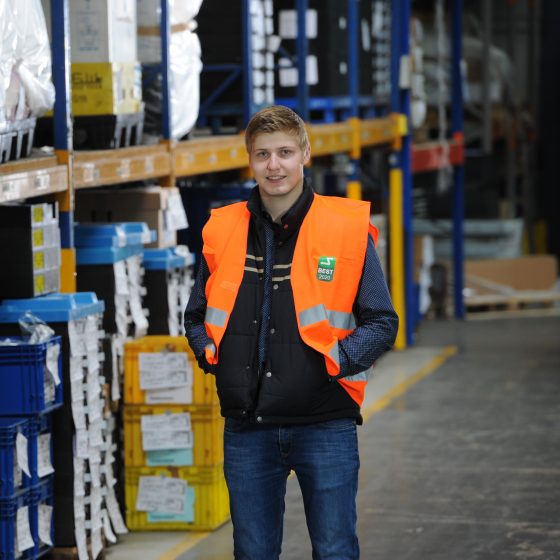 “I’ve been at Schnellecke since 2013. After completing my school leaving examinations (Abitur), I did an apprenticeship as a business management assistant for forwarding and logistics services in Wolfsburg and Braunschweig. It was rather a coincidence that I went into logistics, but I have always been interested in geography and that has a lot to do with logistics after all.

It was important for me to work for a relatively large company where many prospects would open for me. I had never heard of Schnellecke before, but when I found out more about the company it all sounded very interesting and promising.”

And then you started directly in your current position?

“Yes. After the completion of my apprenticeship I was offered a contract in Braunschweig and started immediately in Scheduling. I actually liked this because paperwork alone is not really my thing. All aspects of business come together in Scheduling, and that is ultimately where the money is earned. That’s why it is often referred to as the “heart” of a forwarding company.”

“There are about 20 of us who work in shifts and are there from 6 am to 8 pm every day. In Scheduling you need a talent for organization and have to be able to communicate well, since we are a kind of link between the drivers, the suppliers, and the customers.

I work together with six colleagues in the team for local transport. Each team is assigned certain drivers. We each sit in front of several monitors because many things happen all at the same time. We are practically responsible for the organization of the entire transport at every level. On the one side, we look at the tours, the goods, and the available drivers. On a second monitor I check the incoming emails, which almost always have to be answered immediately. The customers ask about the status of a delivery, for example. But there are also enquiries about whether we can take goods with us on the return journey. This always has to be decided immediately. I keep an eye on the routes in another window in order to see if they still make sense according to the current situation

Parallel to daily business, we do the planning for the next day. But that does not mean that we then have less to do. There are so many factors that can influence the tours. We are challenged anew every day to find fast and unplanned solutions. The causes for this are extremely varied – from an unannounced town hall meeting at a supplier which delays the loading, up to a traffic jam or the later than planned unloading of goods.

The work that I do can often only be done in a team. Alone one would often be in a fix. We constantly keep each other informed and consult with each other continuously.

Furthermore, it is one of my jobs to resell tours to third parties every day so that surplus loads can be delivered on schedule. For this there is a special portal where the order processing is done at rather short notice. In return we also buy loads in order to utilize the complete capacity of our vehicles on all routes and to avoid empty runs.”

Do you enjoy your work?

“As a whole it is rather stressful but also an extremely varied job, since we ultimately ensure that all transports arrive at their proper destination on time. And I really, really enjoy doing this. My goal is to one day also take over staff responsibility, which is why I am also currently studying business management.”