"No employee actually enjoys doing that"

A successful pilot project with a compartment insertion robot.

An employee who works around the clock without complaining, who doesn’t need a break and doesn’t make mistakes, who takes on monotonous work from people and frees them up for other tasks. This is how many people imagine the future with robots. But will it really be that simple?

In Soltau, Schnellecke packs vehicle parts in order to then export them. It is called CKD when vehicles are shipped overseas in individual parts in order to avoid high import duties. For this, the company does not only rely on people, but also on state-of-the-art technologies: New employees are trained using virtual reality applications, and the transport within the huge warehouse is partly handled
by autonomous tugger trains. The parts are picked using data glasses and X-Band. Since recently, a robot has also been working in one section of the site.

“So-called compartments are often used for the safe transport of fragile individual parts,” explains Andreas Zitzer, head of the BU in Soltau. “These are protective covers made of cardboard combs that are inserted into each other to form transport cells in which the respective parts can be safely placed.”

The manual assembly of these compartments is often time-consuming and difficult. Zitzer knows: “No employee really enjoys putting the compartments together.” For this reason, Schnellecke started the pilot project “compartment insertion robot” with the aim of integrating a system into the operative day-to-day business in order to relieve the employees of this process. 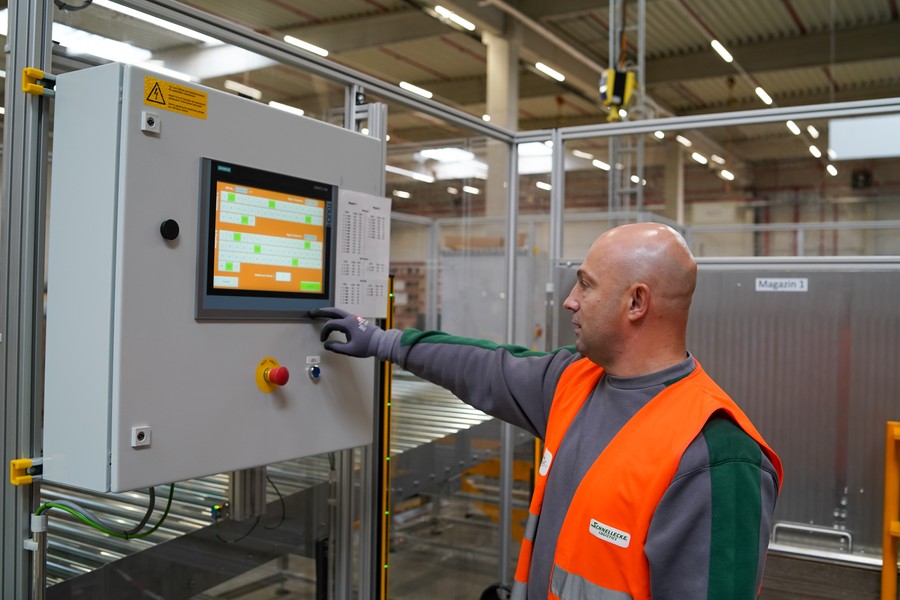 “Now, it's not just a matter of putting a robot there and programming it a little,” smiles Waldemar Gross, who headed the project. “Such a robot needs a complete infrastructure, from the feeding of the compartment combs, to sensors and dispatch. We have to therefore integrate conveyor technology and visual recognition capabilities.”

The mechanical arm is at the core of the system. To start the work process, the compartment insertion robot needs the appropriate
material, which it obtains from two magazines. They contain the respective combs – one for the longitudinal side, the other for the transverse side. The robot pulls the combs out of the magazine one by one and then puts the compartments together on an automatically adjustable insertion table to form a transport cell.

Despite its flexible adjustment options and the fact that the compartment insertion robot can insert virtually any form of protective cover at its insertion table, its operation is incredibly easy. The employee does not need any special training or specialist knowledge – a short introduction is sufficient.

Supplement, not a replacement

When the divider is finished, it is lifted out of the insertion table via a rail system and rolls towards the tray via a conveyor belt. At this point, the robot is already taking care of the next compartment, while the employee can continue working with the produced spacer.

But back to the question raised at the beginning: Is the robot really the perfect employee? “It is as long as everything works,” laughs Gross. “However, it specializes in a small sub-task; if someone is needed elsewhere, you can't just use it there. And if there’s a technical malfunction, people have to take over again. Such a robot is a supplement, not a replacement.”