"Our employees are our strength"

From Fiumicino airport in Rome it takes us about half an hour by car to reach Abruzzo. All around us the wild hills rise up, at whose tops here and there houses are slapped as if glued there by the hand of a giant. Deep gorges appear out of nowhere, shining white rock walls and hidden valleys.

After several hours, we reach the plain that stretches as far as the Adriatic Sea. Here, in the municipality of Atessa, Schnellecke has its newest site in Italy. Atessa itself is a small town whose houses crowd together on a roughly 400-meter-high hilltop. The industrial area in the Val di Sangro between Abruzzo and the Adriatic Sea also belongs to the municipality. We pass Honda's Italian motorcycle factory
before reaching the customer's factory, one of the largest companies in Abruzzo. This is where vans roll off the assemby line whose chassis are also popular as a basis for motorhomes, so it is no wonder that the production figures are on the rise. Numerous service providers and suppliers have settled around the plant, as of recently also including Schnellecke.

"We are a pilot project"

We are greeted in front of the building by Alfonso Tamasi, Business Unit Manager, Laura Gallerani, responsible for Lean Management in Atessa and Bologna, and Antonio Tranquillo, Operations Manager. The sun is still shining strongly on this late September day, but it is pleasantly cool in the building.

“Although we are one of the newest sites in Europe and not particularly large, we are strategically very important,” says Tamasi, since Atessa is the first business unit to work for this customer in Europe. “Previously, the customer organized the line supply in Sevel itself,” says Tamasi. “Schnellecke is the first external company to be commissioned to do this. So we're a
pilot project, so to speak.”

The contract was signed in June 2018, and production already started on 15 October. With an area of 3,700 square meters, the building is not particularly large, but it is initially only a fraction of the factory supply for this customer – in total around 1,500 mostly smaller parts – that is handled here. Every day, 23 trucks are unloaded
at the incoming goods department. The pallets are either placed in block storage or in the high-bay warehouse. The necessary deliveries
are picked from there. Around 3,000 small loadcarriers (SLCs) leave the hall every day.

“We originally planned to deliver 2.5 SLCs for each vehicle to be built,” explains Tamasi. “In the meantime it has already become three.”
That makes over 900,000 SLCs a year. The work is carried out by about 45 employees in three shifts. In addition, there are two additional
shifts on Saturday and one extra shift on Sunday. “These were not originally planned,” says Tamasi. “That's why we had to change our entire organization during on-going operations.”

But this flexibility is a natural feature of the team in Atessa. It was already necessary at the start of production. The customer operates a uniform warehouse management system at all its sites. This customer site was the last company in the group to introduce the software in January 2019. “We are pioneers,” smiles Gallerani. “We are the first logistics company here in Atessa to use this system.”

Despite a one-week training session by the customer, some problems were quickly encountered during day-to-day operations. “Some of
the software’s functions didn't match our processes,” recalls Gallerani. “We then adjusted the functions, and after two weeks everything
worked perfectly.” 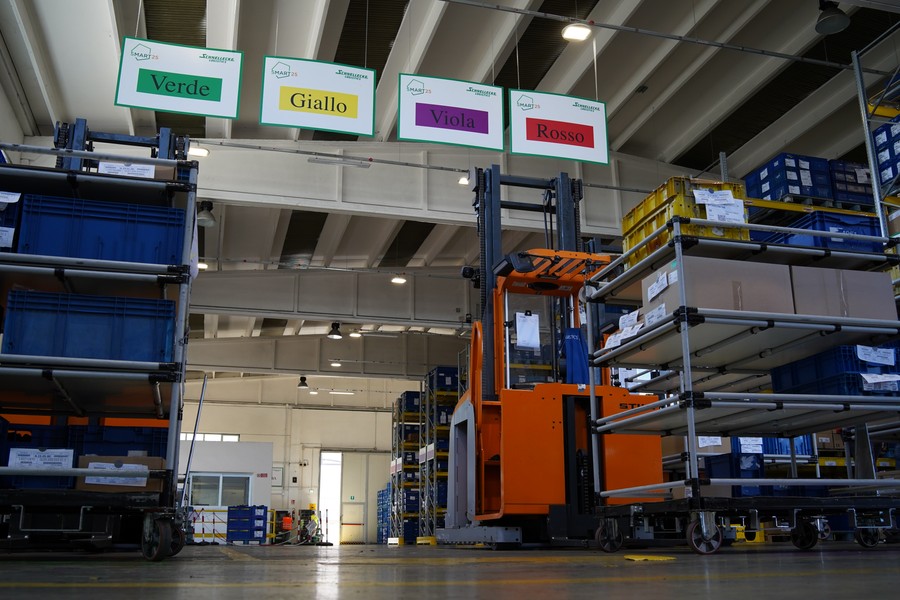 We notice that the rows of high racks are labeled by colors. Red, yellow, violet and green are written on large signs at the top of the racks. These categories can also be found in the outgoing goods department. “These are the four routes that exist in the customer's factory,” explains Tamasi. “We have aligned all our processes in this way to avoid mistakes. There is one employee for each line who puts together the necessary deliveries. Around 20 of our employees also work at this plant. They receive the deliveries and take them to the appropriate production lines.”

That sounds easier than it is. Not all routes are equal. Yellow and violet are particularly important, for example, because a missing or faulty delivery can lead to a production stop. Green and red, on the other hand, contain parts that can be used in different assembly stages. In addition, the routes are not always the same; they have to be flexibly adapted according to the production requirements of the customer.

After a tour of the hall, Tamasi and Gallerani inform us about the personnel situation. “Schnellecke has a good reputation in the region,” stresses Tamasi. “People come here and ask if they can work for us.”

So it was relatively easy to get good employees – with an unusually low average age for the region of around 30. “For this customer in particular, it is important that the employees there not only have specialist knowledge, but also good communication skills,” Gallerani
emphasizes. “They always work directly with the customer, and the chemistry has to be right.” 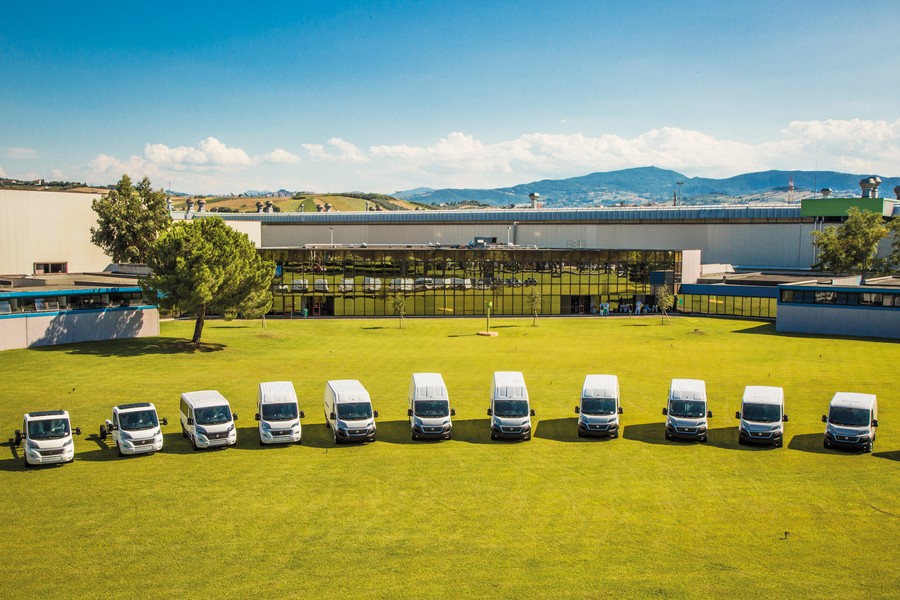 We can see that for ourselves now. Only a few minutes by car and we reach the factory. This makes the company an important economic factor in the region. It essentially consists of body production, the paint shop, and final assembly.

You only occasionally see people walking through the park-like area between the buildings. Otherwise it seems at first surprisingly quiet. The entire freight traffic (around 500 trucks and a complete train per day) is handled at the rear of the premises. Up to eight trains and over 200 vehicle transporters per day take care of the shipping of the produced vehicles and chassis.

If they don’t require protective clothing, for example when welding, all of the employees of the customer wear white work clothes. It is the largest car body plant in the entire Group: all assembly lines add up to a total length of about eight kilometers. However, the car bodies are only assembled here. The galvanized sheet metal parts and other components are delivered by suppliers.

The heart of the plant is the final assembly line, which employs over 2,500 people. The van can be ordered in over 13,000 configurations. This requires many different individual parts on the assembly line, and Schnellecke is also involved in their delivery. Once the required parts have been scanned and picked, the electric forklifts race off on their routes, which are up to two kilometers long. Here, as in the final assembly, people are still needed; on our way through the hall, however, we also encounter driverless transport systems that transport parts.

Laura Gallerani is often here at the factory to identify any potential for optimization. “You have to talk to people; you have to listen to them. You have to be with them when they do their work on the shop floor. Only then can you really understand how everything works and how things can be improved. The best suggestions for improvement come from the bottom up.”

The figures prove her right: Last year, the Atessa site had the highest proportion of kaizen events implemented of the entire Group, measured by the number of employees. “Our employees are our strength,” emphasizes Gallerani. And Tamasi adds: “People must have the feeling that they are involved in all processes. Then they also get on board with new ideas, and together we can achieve a lot.”