"Picking for the Suma with the K-device"

In Landshut, Schnellecke ensures the supply of the customers component assembly plant with innovative methods 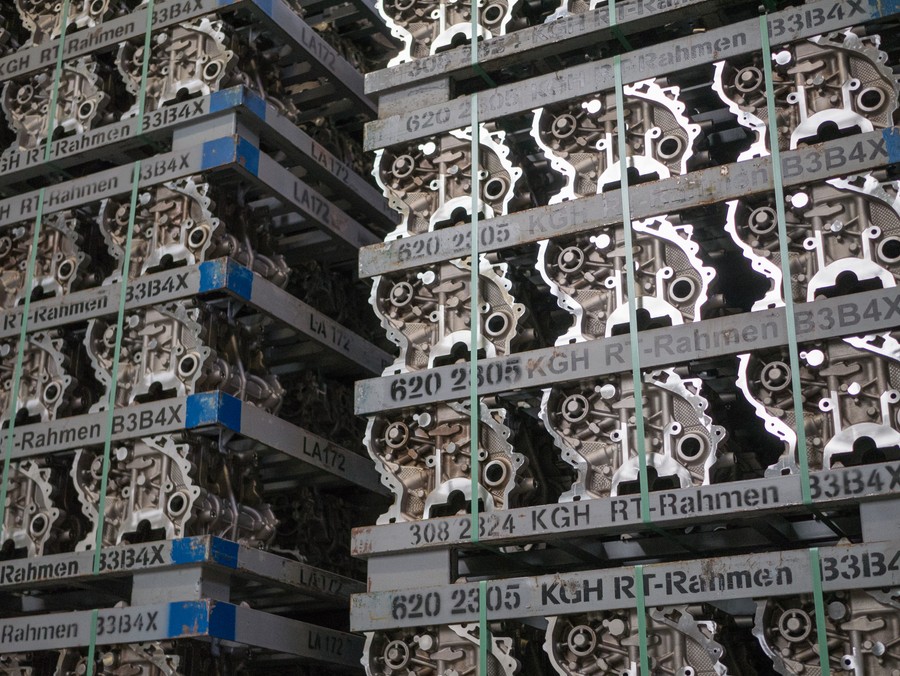 On the outskirts of the Lower Bavarian city of Landshut a factory complex has spread out and forms a small town of its own. On the premises there is also a building that has been managed by Schnellecke for some time now. The production supply in the plant is ensured from here.

More than 4,000 employees assemble engines and chassis components of light metal castings, plastic components for the interior and exterior, as well as cardan shafts and replacement
engines that are delivered worldwide to almost all car and engine plants of this customer.

Just inside the entrance of Gate 5 we find ourselves in front of of the large building where Schnellecke is located. From here, the sequencing for the production is ensured. Six departments of the plant are supplied: Light metal foundry, cardan shaft production, special motors, electric motors, plastic exterior and CFRP. 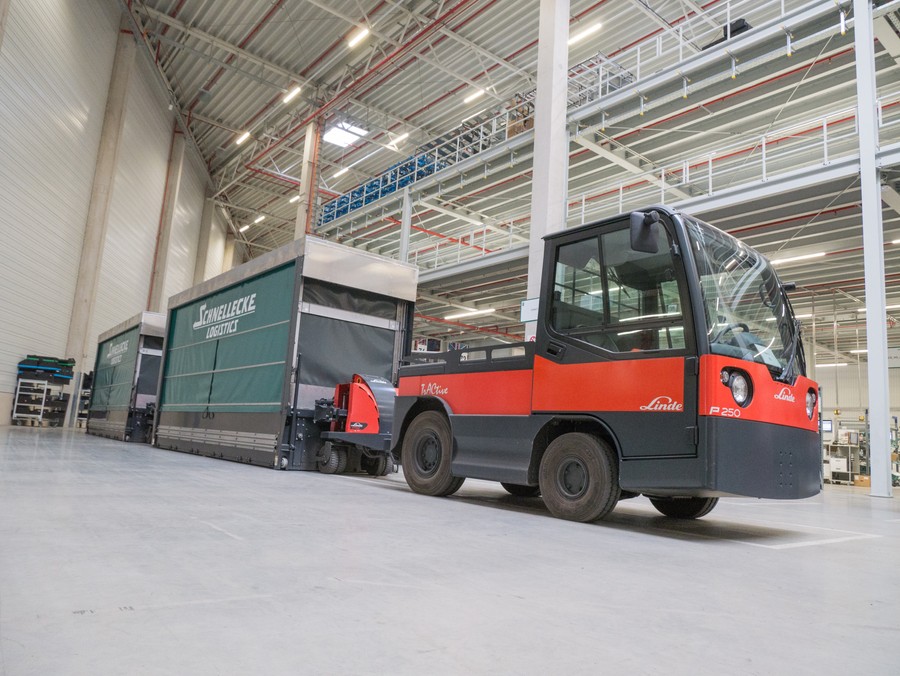 Factory trains and trucks leave the south tunnel at short intervals, carrying the freight for the production lines. What makes this tunnel so special is that only electric vehicles are allowed to drive through it. Even the large 40-ton trucks are powered by an electric motor, which you notice at the latest when they begin to move almost silently. There are mobile charging cables on the ceiling of the tunnel that can be pulled over to the vehicle and plugged in right after it stops. “The electric motors were a suggestion from the customer, which we were happy to comply with and for which we can use our experience in the implementation of E-trucks,” we learn. “There were indeed a few startup difficulties, since the vehicles being used here under real production conditions are actually prototypes, but now everything is working perfectly.” 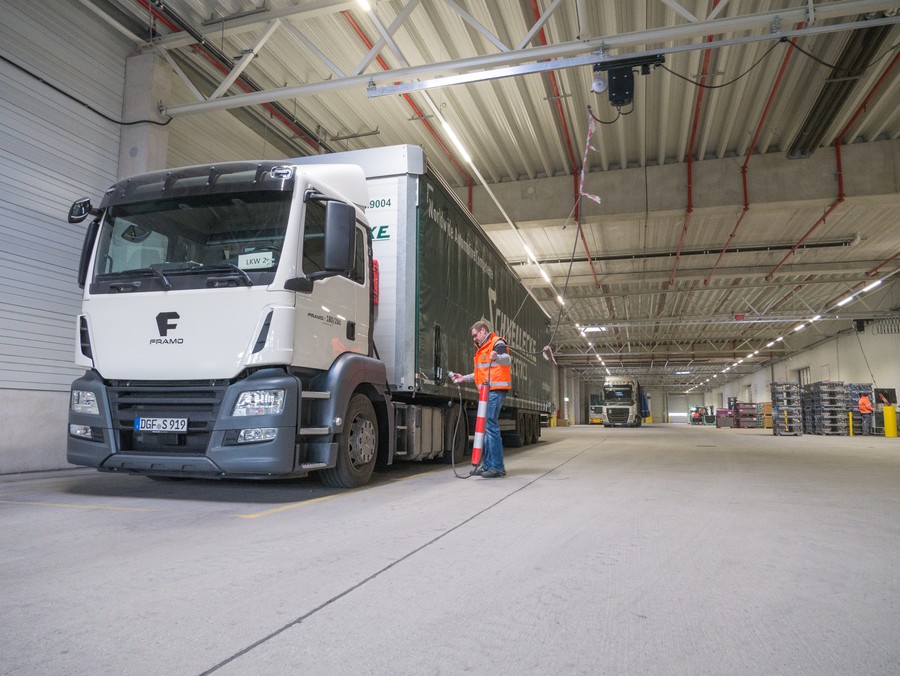 The trucks are used for the heavy components, such as the supply of the Light metal foundry with full containers and the disposal of the empty containers. Lighter parts are taken to the assembly lines by the factory trains. Seven of these extra-long tugger trains were newly bought. They are extremely silent and emission-free, and tremendously maneuverable and directionally stable despite their length.

The complete internal traffic goes through the south tunnel. Everything that comes from outside or is delivered there goes through the north tunnel, since Schnellecke does not only deliver inside the plant but also takes on finished components and prepares them for pick-up. The trucks in the north tunnel are primarily vehicles with diesel engines. 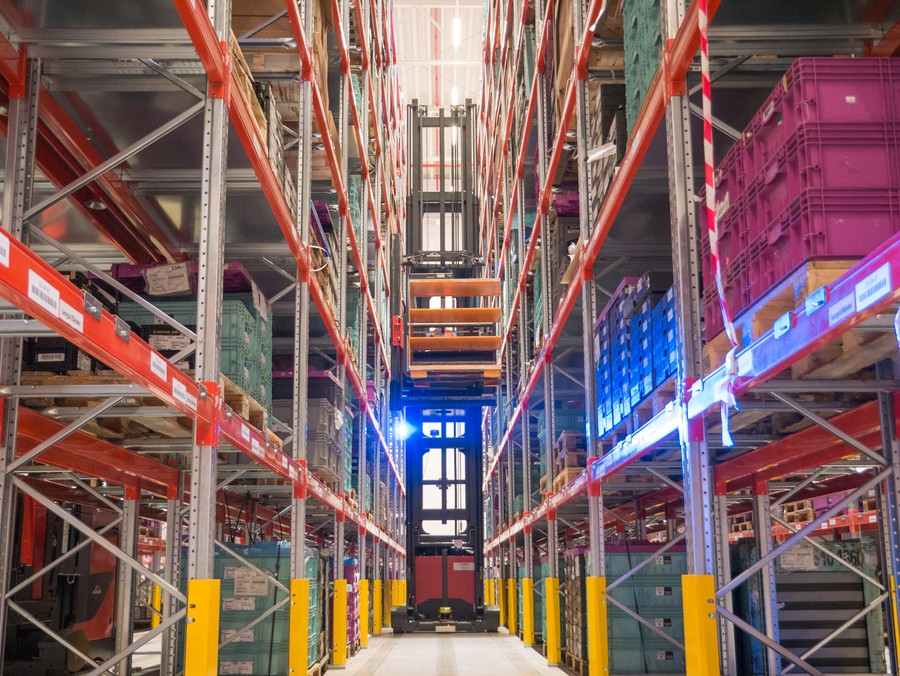 The warehouse, with a high rack warehouse, block storage warehouse, and narrow or wide aisle warehouse, is between the two tunnels. The picking is done here, in quite a special way
however. An employee on a narrow aisle picking device drives into the rack aisle and, depending on the item to be picked, rises several meters into the air until reaching the right rack. The forklift pulls the storage container with the parts out of the rack in front of the driver, who can then manual pick the items that are displayed to them by the SAP system as the current call-offs, and put them in the circulation container.

A special language is used for this. “Der Kollege pickt jetzt mit dem K-Gerät für den SUMA”, for example. K-device stands for picking forklift, SUMA for supermarket, and picking means the removal from the containers.

All forklifts are connected to each other via a system called IdentPlus, a laser-based 3D forklift guidance system which is linked to the customer's SAP system. Sensors are mounted on all forklifts. Thanks to precise laser localization, the forklift drivers are led directly to all requested goods. Goods, storage locations, and destinations are automatically identified without scanning any barcodes. A driverless transport vehicle which is also controlled by IdentPro is currently in test operation as well. 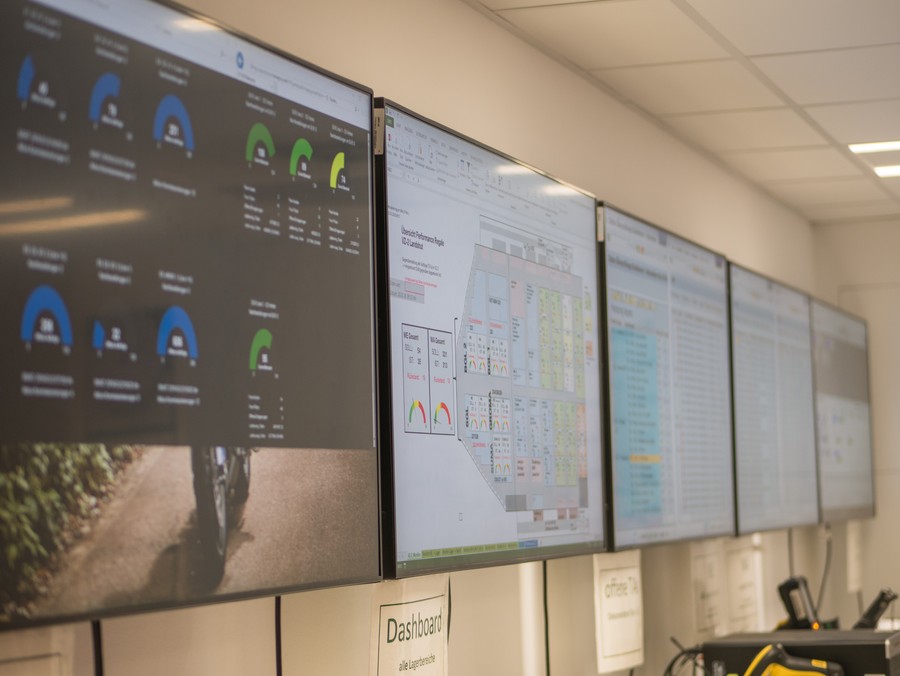 Visit to the supermarket

We are moving on to the supermarket mentioned above. Here, employees pick individual parts for specific vehicle components into so-called carsets, which exist for the front and rear bumpers for example. The pickers are supported by an electronic guide (pick by light), and the placement into the containers in the right sequencing compartment is also controlled electronically. The carsets are compiled from of a total of more than 300 different
individual parts.

The control station, the heart of all activities carried out here so to
speak, is located along the side of the building. Half a dozen large monitors on the longitudinal wall give a real-time overview of the situation of the area managed by Schnellecke. The customer's control station is right next to it. All systems are linked together,
meaning that occurring problems can be solved jointly without any delay.